Not only did the famed Seminole war leader lead his forces against the U.S. Army near the barricaded village of Micanopy, Florida (Ft. Defiance) in 1836, but Zachary Taylor, future president, once led the Army of the South while at Ft. Micanopy. Governors, generals and some of the Seminole's greatest warriors clashed here during the 2nd Seminole War (1835-1842). And more soldiers died in combat while stationed at Micanopy than in any other Florida garrison. Turns out that Micanopy, one of the state's smallest towns, is actually very big in history.

"Charge With Every Man," Jackson Walker, 2011
​
Battle of Micanopy
​        The battle took place on the morning of June 9, 1836. Seventy-five troops under the command of Major J. F. Heileman engaged a larger Seminole force headed by Osceola, numbering about 250 warriors. Two units--one mounted, the other foot artillery--departed Fort Defiance (the fortified village of Micanopy) to meet the Seminoles. In a classic pincer movement, troops engaged Osceola’s left and right flanks while an artillery unit deployed a cannon at the center. The battle also featured a surprise attack on the Seminole’s rear flank. After one hour and twenty minutes, the Seminole retreated. The Army suffered one death and several wounded while Native American losses are unknown. Heileman was brevetted to Lt. Colonel by order of President Andrew Jackson, but died of malaria shortly thereafter.
​      This engagement boosted Army morale during the opening of the Second Seminole War, a period overshadowed by a series of military reverses. National newspapers were rife with stories of bravery and tactical success. “The repulse of the Indians at Micanopy,” noted the Army & Navy Chronicle, “has dispelled the gloom that was pressing upon our arms” and merited “praise upon the gallant & the brave.”

Historical Context
Following the withdrawal of most of General Winfield Scott’s “grand army” of 5,000 troops one month prior to the battle, all garrisons in the East Florida interior were suddenly vulnerable to attack. The victory at Micanopy thus served to rally the troops in the face of significant hardships, which also included a virulent malaria epidemic. Although this feat proved short lived, the engagement did indeed mark the first time during the campaign when the Army—notably without the presence of imperious generals—truly met the country’s expectations of heroism under fire. 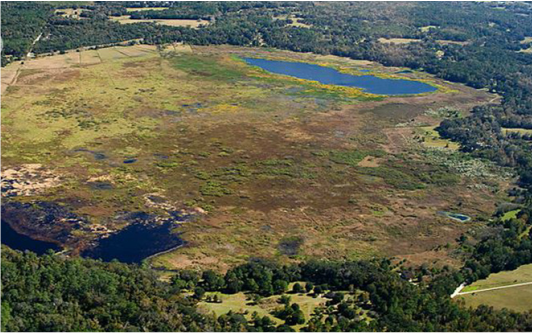 Aerial view of Tuscawilla Prairie, the site of the Battle of Micanopy (1836).